Many people that admire and love the intricate blooms and flowers of orchids find themselves asking ‘are orchids edible?’ This question arises because they believe that most flowers are not edible as leafy vegetables. Well, that is not true with orchids.

The short answer to their question is Yes, the flowers of orchids are safe for consumption. Orchids are edible and even serve as medicinal herbs in certain cultures.

However, not all species of orchids are safe for consumption, some might cause stomach upset and irritation when consumed.

In this blog post, I will be sharing with you why orchids are considered edible, certain species of orchids that are safe for consumption, and the benefits of consuming orchids.

This post will also talk about how orchids taste and ways to use orchids for your favorite dishes, and many more.  Get ready to enjoy an interesting and educative content

Are Orchids Considered Edible and Safe for Consumption?

To answer the question 'are orchids edible?, 'Yes, orchids are edible and safe for consumption. Orchids have been considered food and herbal medicine for centuries. All flowers and leaves of orchids are edible.

Orchids are the most important of flower families. They are different from other flowers in that they vary widely in appearance.

Orchids have a special role in many traditional foods throughout countries, including those from Africa, Asia, Australia, and South America.

Many families yearning to give birth to a child are encouraged to frequently include orchids in their meals as they are believed to have aphrodisiac potentials.

Which Orchids are Edible?

The leaves and flowers of orchids can all be eaten. Orchids with full blooms, orchid stems, orchid petals, and orchid buds are also edible orchids.

The tubers and pseudo bulbs can also be eaten, but they aren't commonly used in cooking.

The vanilla orchid is currently the most well-known orchid species used in cooking. Its fruit pods are used as flavoring ingredients, and vanilla essential oil is reported to have various therapeutic benefits, including being an aphrodisiac, anti-depressant, antioxidant, and anti-carcinogenic.

Leptotes bicolor, a Brazilian orchid, is also another orchid occasionally used as a flavoring ingredient in place of vanilla.

Dendrobiums and epidendrums are excellent species of orchid options available if you're seeking tried-and-true orchid species to use in your cooking. Some Dendrobium flowers are used as edible food decorations.

In Bhutanese cooking, the bitter Cymbidium hookerianum orchid is also used as a spice.

How Are Edible Orchids Prepared?

Many orchids are handled before being eaten rather than being consumed right from the orchid plants. Some are dried in the sun, ground, and then steeped in hot water to make tea.

Orchid tubers that have been dried and powdered are used to make "Salep," a popular beverage in Europe and Asia. In addition, salep powder is used to make ice cream, candy, and beverages.

How Do Orchids Taste When Consumed? 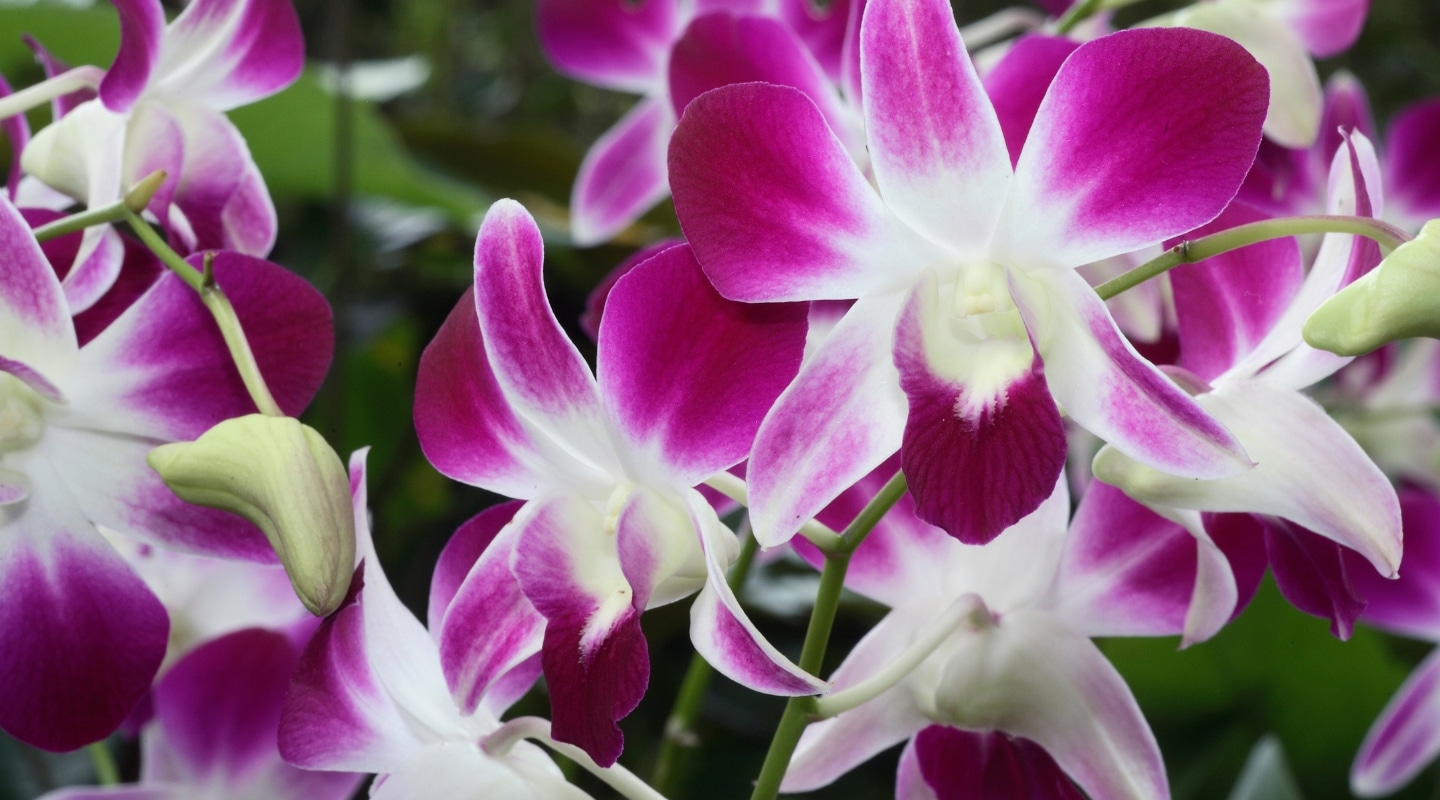 When it comes to knowing how orchids taste, it is difficult to describe and articulate, you just have to experiment with it yourself to know the real taste feel.

The majority of orchids have a mild vegetable flavor with a final hint of sweetness and bitterness toward the conclusion of the flavor.

However, experiments on orchid taste were done by some people in which some claimed that the flavor of fresh orchid petals is comparable to that of watercress, cucumber, endive, chicory, lettuce, and other leafy vegetables. Others claimed that they taste mild at first, then turn sweet or harsh.

How exactly an orchid taste largely relies on the genus of orchid you are using and what portion of the orchid plant you are utilizing.

How To Preserve Orchid Flowers for Consumption

Always use freshly cut or freshly harvested orchid blooms in your dish or beverage as soon as possible. However, you can still store any spare flowers for use in another dish on another day if you have some.

To preserve these orchids, place a cut orchid flower inside of an airtight box or container and keep it in your refrigerator at a temperature between 36- and 40 degrees Fahrenheit (2.22 and 4.44 degrees Celsius).

An orchid can last up to 10 days in your refrigerator when kept at a temperature of 36–40°F and still in good form and freshness. 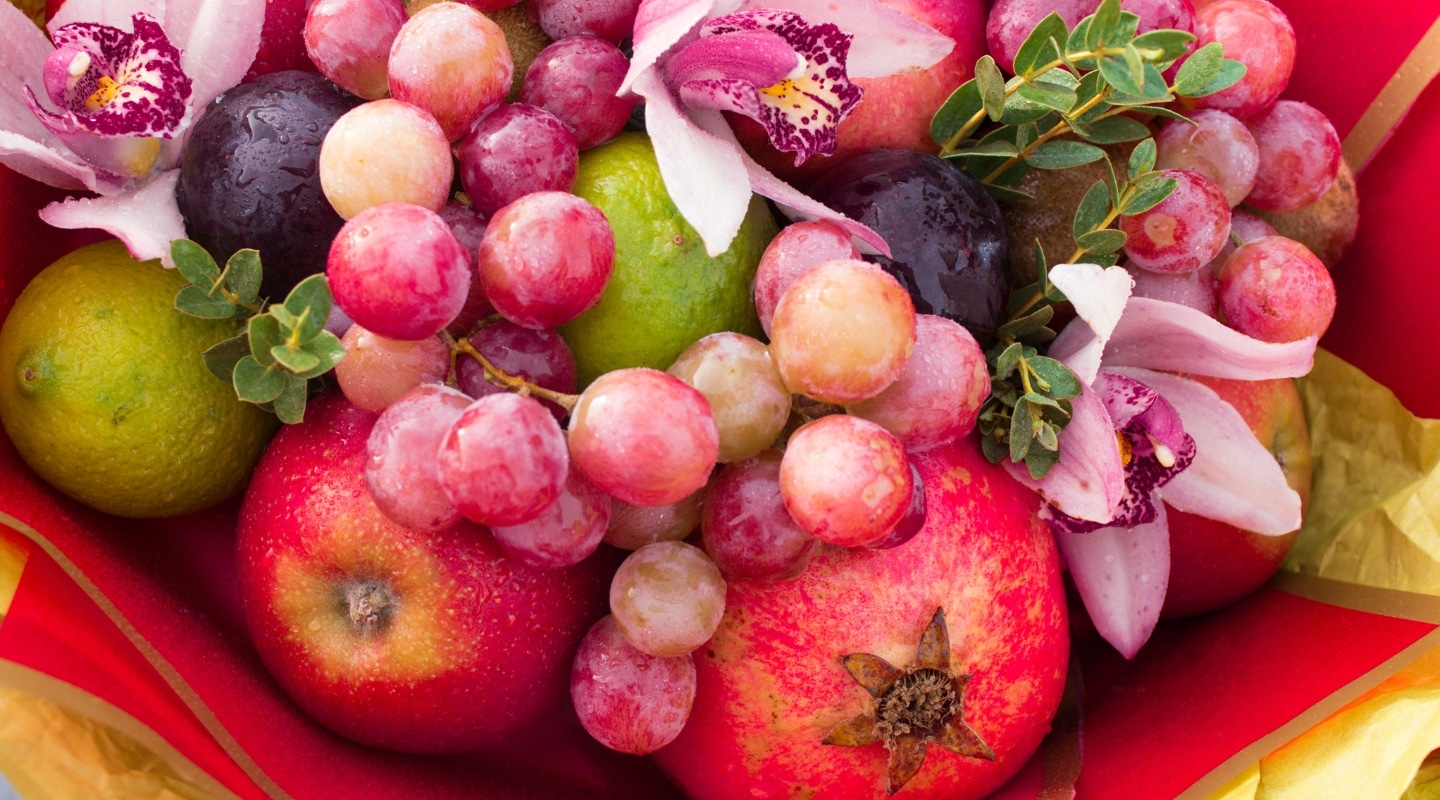 Consuming orchids has many positive effects on your health. Orchid blooms are high in vitamin C and have some nutritional value.

They support a stronger immune system and defend against illnesses. Due to their high fiber content, they also aid with digestion.

Minerals necessary for the body, including calcium, iron, and potassium, are abundant in orchids. Orchids are a fantastic source of antioxidants and phytochemicals.

Since the time of the ancient Greeks, orchids have long been utilized as a popular traditional herbal treatment for medicinal purposes for a range of ailments and health issues. They believed that eating orchid tubers may boost fertility and sexual strength.

The Chinese were reputedly the first to discover the therapeutic benefits of orchids when Emperor Shen Nung who is regarded as the father of Chinese medicine, described Bletilla striata and dendrobium species of orchids in his medical journals in the 28th century BC.

Dried dendrobium is used in traditional Chinese medicine and even Japanese medicine to treat cancer, enhance vision, reduce migraines, calm convulsions, and strengthen the immune system.  Even up until now, the Chinese continue to sip medicinal tea flavored with orchids.

Other species of orchids such as the orchis latifolia, vanda roxburghii, and vanda tessellate are thought to contain phytochemicals and antibacterial qualities that can aid in the treatment of a variety of medical conditions.

How Do You Eat Orchids? 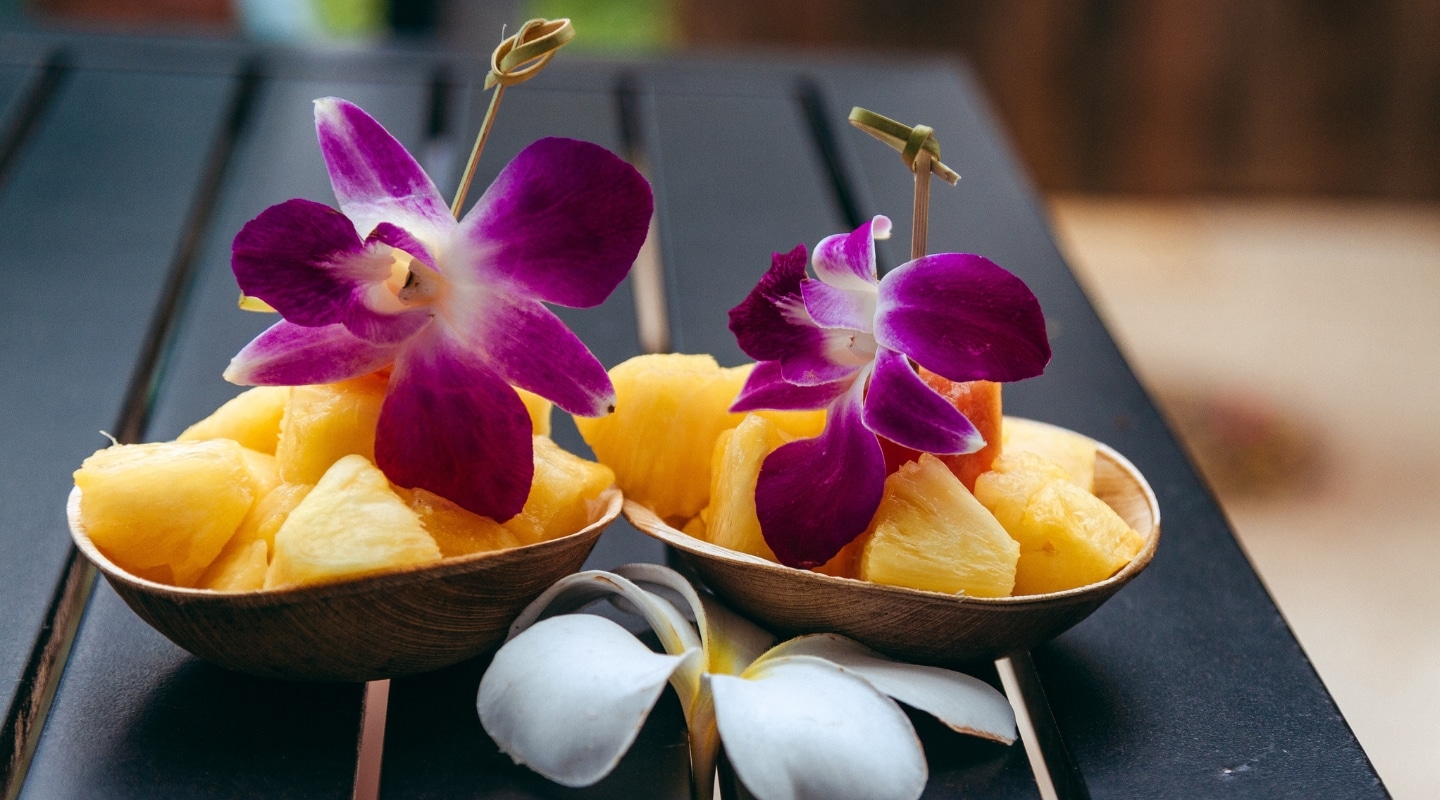 There are several ways to eat orchid flowers, you can either use them in your cooking or serve them as dish ideas.

How to use orchids in your cooking?

Here are three ways to consume orchids when you use them for your cooking.

Orchids have a light vegetable taste that makes orchid flowers a great choice to boost the flavor of any dish you cook.

Orchid flower petals are also an excellent spice choice of dried powder sprinkled on top of your dish while cooking and when the dish is finished.

2.     Orchids can be used as food décor for appearance in your cooking

When it comes to making desserts such as dessert loaves, cakes, frostings, and many more baked desserts, orchids are an excellent cake decorations choice for appearance. Vanilla orchids are used in cooking many desserts.

3.     You can use orchids as edible garnishes in your cooking

How To Serve Orchids As A Dish 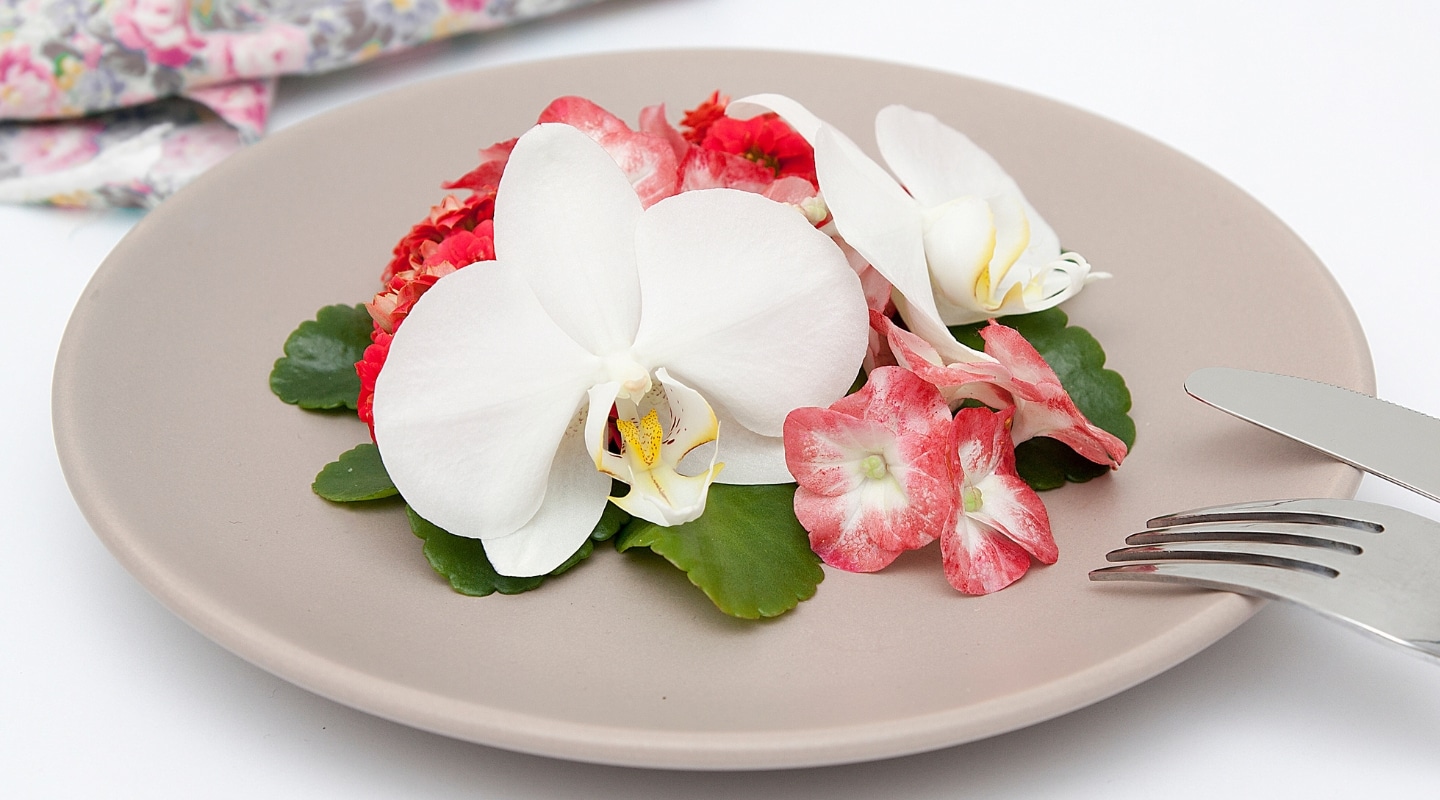 Here are four delicious dish ideas for serving orchids as a dish for consumption.

Adding orchids to a fresh salad is a popular way to serve them as a dish idea in your kitchen. You can rip up the petals and add them raw to the salad dishes instead of adding a large flower as a garnish on top of the greens. You may also add orchid powder to your homemade salad dressings.

Orchis, a genus of wild orchids, and dried tubers are used to make salep powder. Along with other tasty spices like nutmeg and cinnamon, salep powder is combined with hot milk to make an edible orchids drinks called Wild Orchid, a traditionally made drink in Turkey.

Orchid flowers go well with other veggies and are a wonderful meat flavor. Therefore, they can be served by including them in your stir-fries, rice dishes, and barbecue meals.

Additionally, you can prepare an orchid tempura, a Thai traditionally inspired dish. It is prepared by simply deep-frying your orchid blooms after dipping them in flour and egg batter.

Are orchids poisonous to humans?

Orchids are not poisonous to them. Therefore, humans can eat edible orchids. One of the most popular orchids ingested is Vanilla. Other orchids are utilized in salads and desserts.

Are orchids unsafe for consumption?

Orchid flowers are edible; thus, are safe for consumption. However, what is unsafe about eating orchids is eating the fertilizer or potting soil in which your orchid is placed. This is dangerous to ingest as it then makes the orchids poisonous.

Therefore, you need to make sure to select plant portions, like the roots, that do not come into touch with the growing medium before consumption.

Can I store edible orchids in my refrigerator?

Yes, you can store your orchid flowers in the refrigerator and they will still be fresh and safe for consumption. An orchid can last up to 10 days in a refrigerator when kept at a temperature of 36–40°F and still be in good form and freshness.

Orchid flowers are edible orchids. Many components of orchid flowers ranging from orchid blooms, orchid petals, vanilla orchids, and many more are safe to consume and are not known to be poisonous to people.

Orchid flowers have been utilized as natural treatments for centuries in numerous cultures and are excellent additions to a wide range of cuisines across countries. Edible orchids help add some extra flavor to your food.